What is the Carnivore Diet?

There's a new diet doing the rounds, which is actually an old diet that has gained recent popularity due to media hype around high profile individuals such as the well known clinical psychologist Dr Jordan Peterson. This diet is called the Carnivore Diet and has been a staple in the lives of Eskimos (also known as Inuits) for as long as they've been around. People who hear about this diet for the first time have one of two reactions. They either think it's a ludicrously absurd diet or they want to jump straight into it.

This diet goes against everything we were taught about nutrition. As kids, our parents taught us that vegetables were the most important part of our meal and that we had to eat them if we wanted to grow up strong and healthy. However, there seems to be more than enough evidence suggesting this isn't the case.

Eskimo's eat almost exclusively meat, which prompted a study of two men on a year long "meat only" diet conducted by Walter S. McClellan and Eugene F. Du Bois in 1930 and these were the results as quoted from the study:

1. Two men lived on an exclusive meat diet for 1 year and a third man for 10 days. The relative amounts of lean and fat, meat ingested were left to the instinctive choice of the individuals.

3. At the end of the year, the subjects were mentally alert, physically active, and showed no specific physical changes in any system of the body.

4. During the 1st week, all three men lost weight, due to a shift in the water content of the body while adjusting itself to the low carbohydrate diet. Thereafter, their weights remained practically constant.

6. The control of the bowels was not disturbed while the subjects were on prescribed meat diet. In one instance, when the proportion of protein calories in the diet exceeded 40 per cent, a diarrhea developed.

7. Vitamin deficiencies did not appear.

8. The total acidity of the urine during the meat diet was increased to 2 or 3 times that of the acidity on mixed diets and acetonuria was present throughout the periods of exclusive meat.

9. Urine examinations, determinations of the nitrogenous constituents of the blood, and kidney function tests revealed no evidence of kidney damage.

11. In these trained subjects, the clinical observations and laboratory studies gave no evidence that any ill effects had occurred from the prolonged use of the exclusive meat diet.

The carnivore diet is made up of food derived entirely from animals and the general rule is if it walks, flies, crawls or swims it's fair game. You don't need to worry about counting calories or having certain food breakdown like other diets require. You simply eat until you feel full. That's it.

Meats
It doesn't matter if it's white meat or red meat. You can have both. Any poultry whether it's chicken, duck, ostrich or turkey, you can eat it all. There's more variety when it comes to red meats. These foods include, but are not limited to, steaks, burgers, bacon (glorious glorious bacon), and ribs. There are actually a large selection of red meats you can eat and a lot of them contain the nutrients you need. It's good to get fattier cuts rather than lean cuts because you need the fat for energy. Bone broth is allowed and is a good source of nutrients.

Eggs
Eggs have a great source of fat, the yolk.

Dairy
Any dairy products are allowed, whether it's cheese, milk, yoghurt or butter. There are small amounts of sugar in dairy products so we suggest taking a vitamin c supplement to help break down the glucose. It's a good idea to experiment with each dairy product individually as some individuals report having better bowel movements without any dairy in their diet.

Fat
As mentioned, fat is going to be your primary source of energy. Tallow, lard and any other fat-dense animal foods are allowed.

When people hear about the Carnivore Diet they instinctively believe you're going to be incredibly deficient in micronutrients. This idea is way overblown and the following table shows a breakdown of the micronutrients in beef vs "superfoods" such as kale and blueberries. 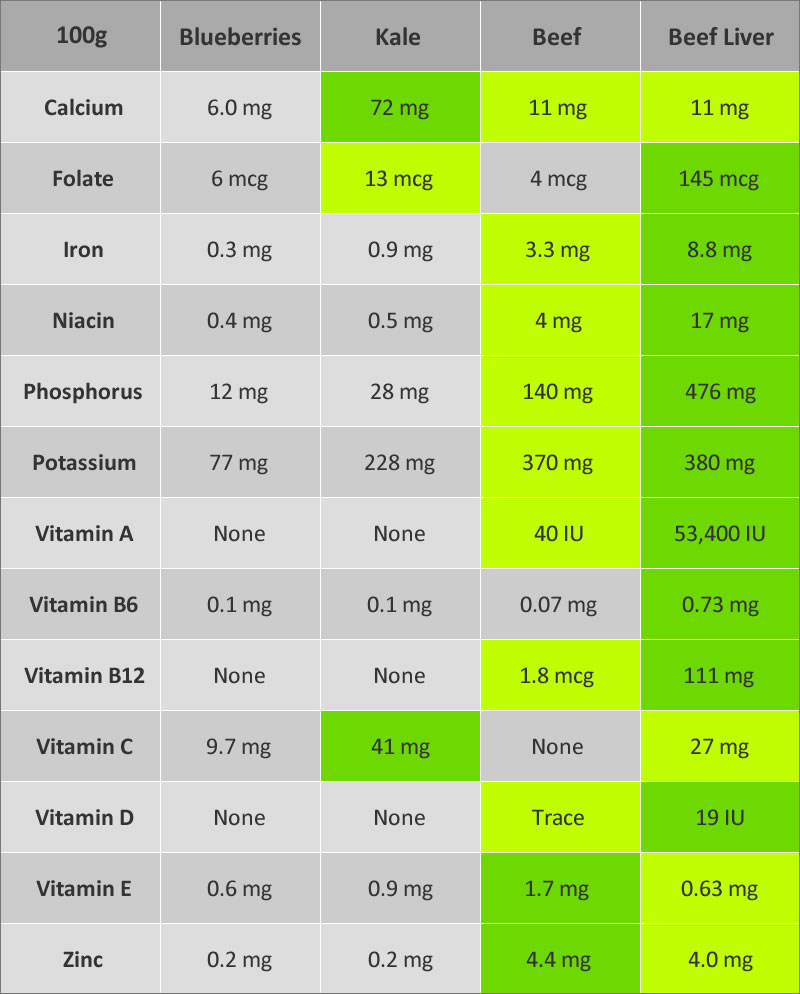 The reason people lose fat on the Carnivore diet is because your body has little to no glucose for it to turn into energy and so your only source comes from turning fat into energy. This state of burning body fat is called Ketosis. The idea is to trigger ketosis and once you've lost enough weight, start adding more fat to your diet to keep your energy levels up.

Common knowledge tells us that fibre intake is important if you want to keep yourself 'regular'. However, a study done in 2012 by the World Journal of Gastroenterology suggests the opposite. Subjects participating in the study were told to avoid fibre intake for two weeks and then increase their fibre intake to a level they were comfortable with.

The carnivore diet isn't for everyone. Some people like variety and if you're one of those people you'll find it difficult to stick to this diet. However, if you're the type of person who can imagine yourself eating braai food every day of the week for the rest of your life then the Carnivore Diet is definitely for you. If you're still sitting on the fence about the diet, we suggest giving it a try for a month and seeing how it goes. It's important to note that you'll have a period of about a week where the body needs to acclimate to the change. You may feel lethargic and maybe a little grumpy but this will end soon and you'll start feeling increased energy levels and alertness.